With the 18-55 mm lens mounted on the camera, running at 18 mm the results are somewhat varied. The images were all post processed using Raw Therapee and stacked using Siril. You can find a step by step process in the tutorial section.

One of the limiting factors is the low ISO performance of the 1000d at only ISO 1600. To mitigate this I will likely add a EOS 1100d or 1200d  body to the collection, as the increase in ISO performance and improved pixel density of the newer bodes will definitely help.

Summer is never the best time to image the night sky here in New Zealand as most of the areas of interest lie very near to the south and western horizons. Add to this the sky darkness is not really at maximum until well after midnight, just adds to the problems. The summer evening skies here retain sky-glow well after sunset set. To our east is the city of Hamilton and light pollution is now becoming severe in the eastern sky which at present holds Orion and Canis Major rising above the horizon.

In this first series of images the most prominent subject was the Large Magellanic Cloud.

The first image is a tiff image saved as a Jpeg to reduce the file size. This is how a single Raw file looks after processing prior to stacking.

The following image is  the jpeg output from Siril after stacking.

The image doesn’t look a great deal different from the original but is a stack of 8 images, run with rejection in the stacking to eliminate any image too different from the others. Noticeable too is the borders which are black as no information is available as the stack slightly rotates each image. In the post processing these will be cropped. 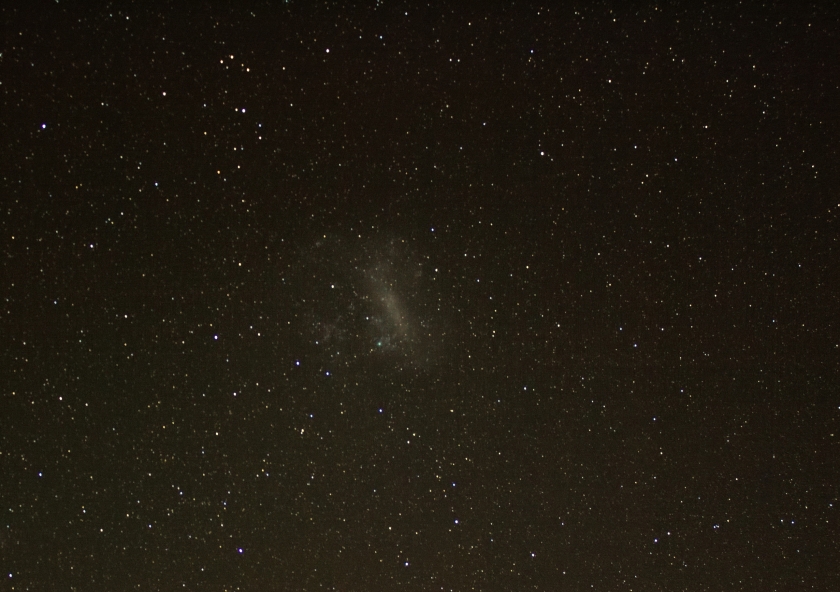 The above image is a crop and further processing of the stacked image. One thing that is quickly evident is how colour is not well recorded at these light levels, this is due to several things, primarily how the Canon sensor isn’t overly colour sensitive at high ISO with very low light levels. The lens itself isn’t as critically sharp in this environment and the 230,000 dot LCD screen isn’t refined enough to determine really fine focus. That being said for a 10 year old sensor with  low ISO ability it did pretty well despite its limitations and no doubt had I bought this camera new at the time I would have been reasonably pleased with the results. Of course a much better lens would change a good amount of the issues currently experienced.

Better results would also be yielded in winter with much darker skies and the subjects in better positions above the horizon.

In case you thought that there was a lack of details in the image heres a somewhat over processed image  showing just what is hidden in the sky glow and low latitude of the subject. 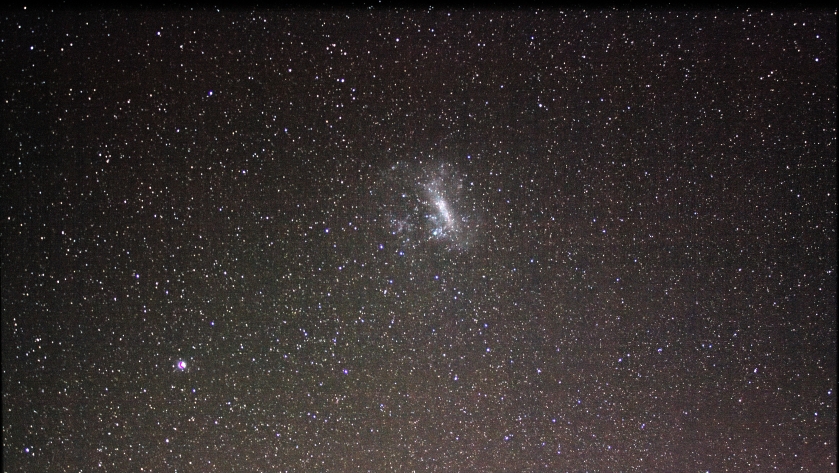 Again this is a crop, but in this image the excessive sky glow hasn’t been eliminated, but rather slightly reduced. Had this image been taken closer to winter it would reveal much darker skies and more detail.

The other issue that is seen with the images is a certain amount of false colour artifacting which wasn’t present in the XA2, and again shows the progress being made in sensor technology.

As a comparison the next image was taken with the XA2 and the 16-50 mm kit lens at 50 mm and shows both the large and small Magellanic clouds. ISO 3200 @ 8 seconds. Note some star trailing ( or distortion ) upper left and the Large Magellanic cloud is bracketed by a pair of meteors. This image is a good example of how good the Fuji lens is and how noise free at ISO 3200 the sensor is as well. Colour in the image is  better handled than in the older Canon. This image was taken  11 May 2016 in late Autumn when we get some of the nicest nights for astro work.

All that said the cropped Canon image above isn’t to far removed from the Fuji results and as I get better with t he Canon  hopefully so will the images.

More to come…. Orion rising and the Southern Cross almost at lowest point.