This is another tutorial that may be a value to some of you using Photoscape as your primary editing tool.

If like me you have aging computers, the Photoscape is a Godsend. Its light on system resources and has enough features for all but the most experienced of Post Processing users.

A tool that is often overlooked or not used because of lack of knowledge or experience is the clone tool and yet it is one of the most useful tools available to us.

Below is the image that requires some work, in this case we want to remove the power lines seen running through the middle of the images. To do this we will use both the clone & Blur tools. 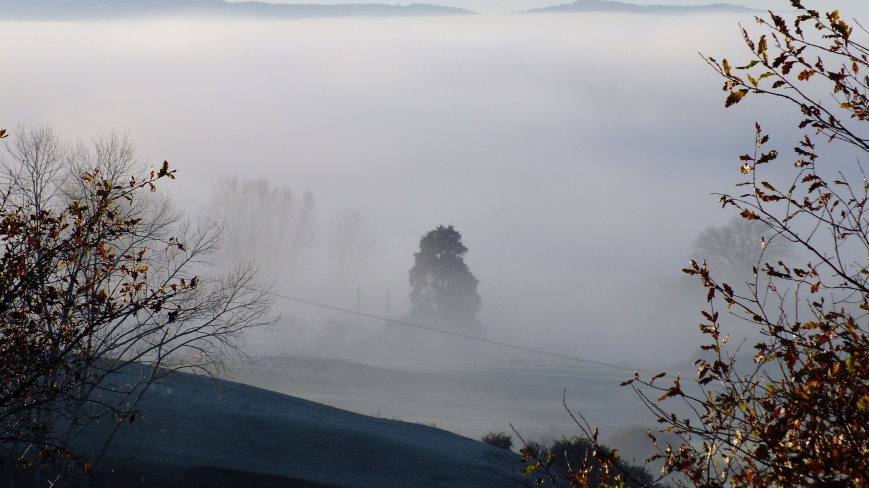 The next image shows the editor with the image loaded. As we want to work in the maximum amount of space and at 100% we need a large area. The following image shows the toggle to click and the full editing area available.

Now we need to select our tool. 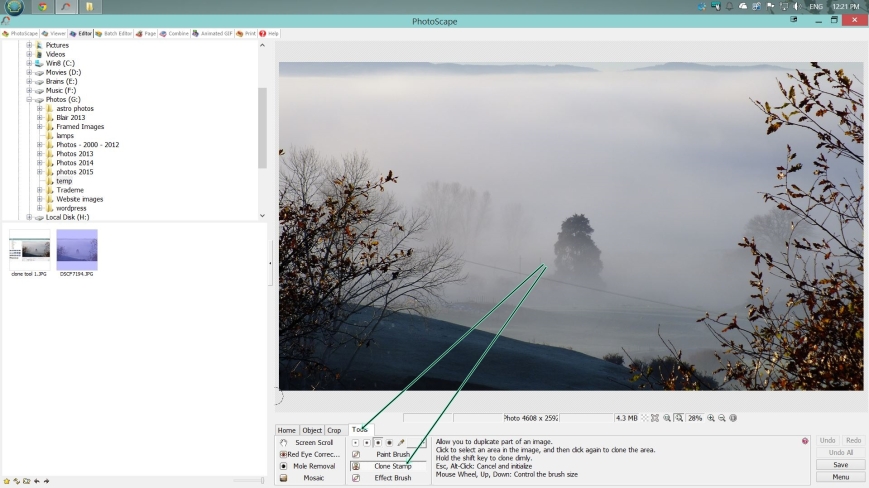 You can see in the image below that the tool has been selected and I have opted for a small tool size and shown in the tools windows. Scroll the mouse wheel to make the area larger or smaller as required. In this instance I’m using a smaller size so that I dont introduce any extra information as I use the tool.

To use the tool click an area that is close to the background color you wish to replace. When clicked the cursor will change to a second circle and connecting line. The second circle is placed over the area to be removed and press and hold the mouse button and move the cursor until the area to edited is complete. Work in small section and if you dont like the result, simply click the undo button. You will note in the image below I have kept close to the lines as I want the background to be as close to identical as the surrounding area as is possible.

In the next image you can see I have sized up the cursor a bit as I want a greater area to be used in this part on the image.

The following image shows an area being worked on with a medium sized cursor but the area I selected isnt the correct hue. At this point I stopped and hit the undo button to start this area again. 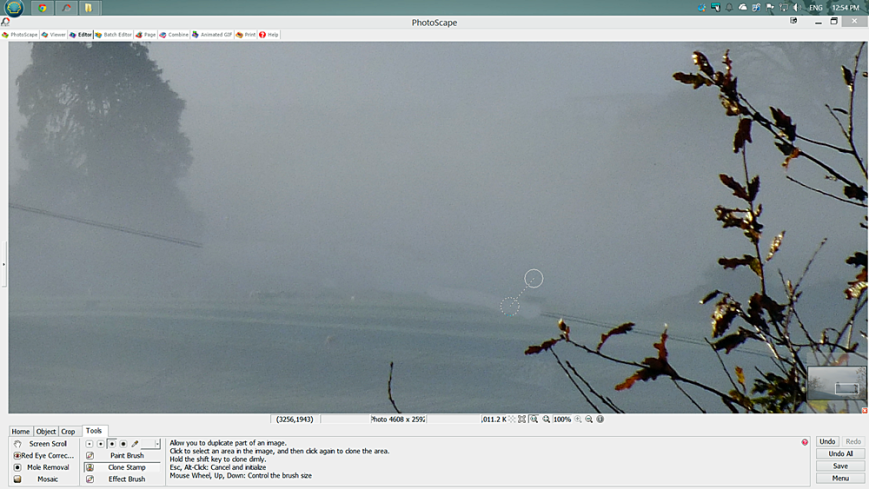 This time the color should match the background better than in the previous step.

You can see in this next image that I had to work with a small area and very close to the lines to get just the right amount of background color.

Remember the clone tool mimics whatever the detail is in the selection area and is copied to the working area. More on this later. 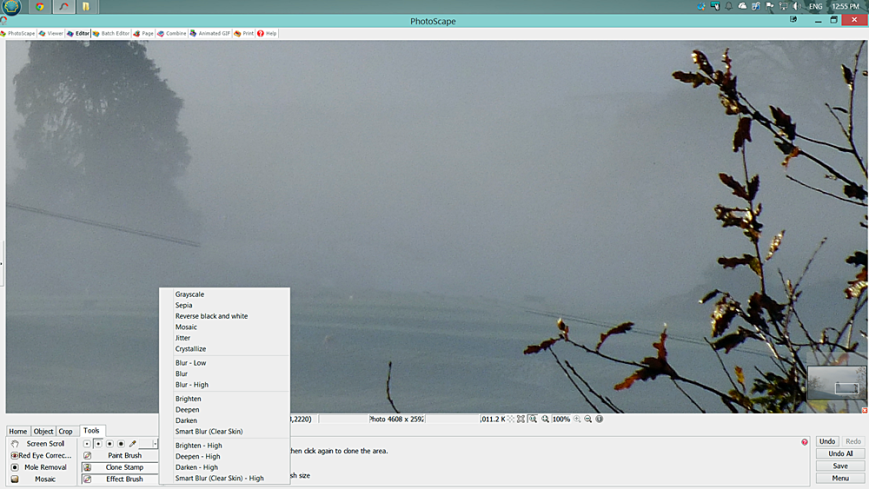 The blur tool has a number of settings and can be a very handy tool when needing to make the background of an image fade out, and of course there are many other uses for it. I suggest you spend some time using other blur settings to see what effects you can create. For now though we only need the standard Blur setting.

The image below shows a red outline of the area to be smoothed and I have chosen a large brush to help blend colors and texture over a wide area. Just like the Clone tool you can use the scroll-wheel of your mouse to size the cursor. Its then just a matter of randomly waving the tool over the general area. Dont be to consistent or it can show whats been done. We just want to achieve a smooth but irregular coloration of tht the image in this area.

Once that is done its time to do the right side of the image. The process is just the same and little steps will be required in this area as the image has quite a lot of detail to work around.You can se this in the highlighted area on the bottom right. Remember too that we are working at 100% image size so that when we view the image at normal size these details will be small to minute.

The next image shows the job done on the right side, which was finished with a tiny amount of Blur applied for smoothing. Now its on to the left side which contains a lot of detail in the image that has to be worked around.

The same processes are applied as previously as can be seen in this image. It shows the majority of the line detail removed but there is still some to be worked on between the branches. To do this it is best to spot each area with as small a tool as you are able to so as not to remove image details that you want to retain. It is almost inevitable that you will lose some of the branch details, however this is where the clone tool really can help.

You can see this process in the highlighted section. Some detail was removed from the branches and by cloning the main branch I have been able to restore a good rendition of the original data in this area. Note the slight misalignment in the cloned branch in the circled area. At normal print sizes it unlikely that this would ever be seen but its worth the effort to redo this type of misalignment, at least for your own satisfaction if nothing else. To finish I added a tiny amount of “Low Blur” in between the branches just to eliminate any straight lines or obvious blemishes. 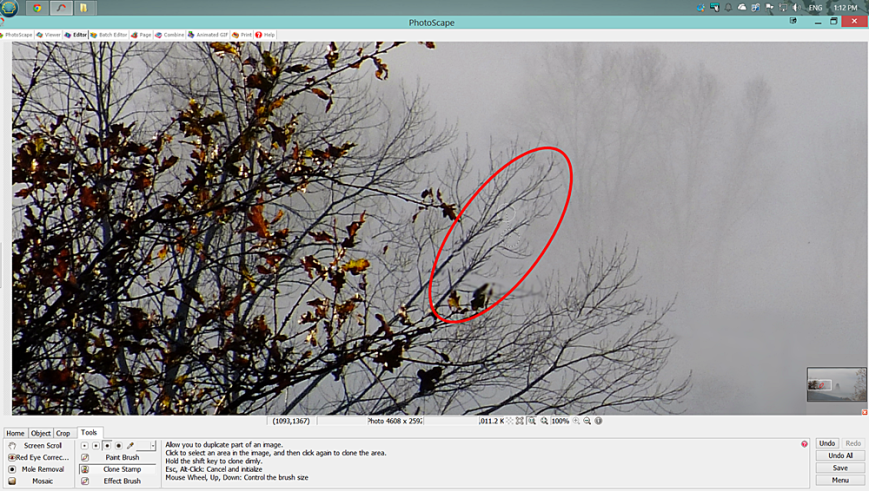 To finish the image I  chose an Agfa selection from the Film Effects list and selected a vignette that suited the image to give it that slight foggy window look, after all it was the middle of winter when this image was taken.

And as a final touch I selected one of the frame options and tweaked it a little to suit. Below is the final image and below that is the image scaled to fit my 27 inch monitor as a wallpaper. 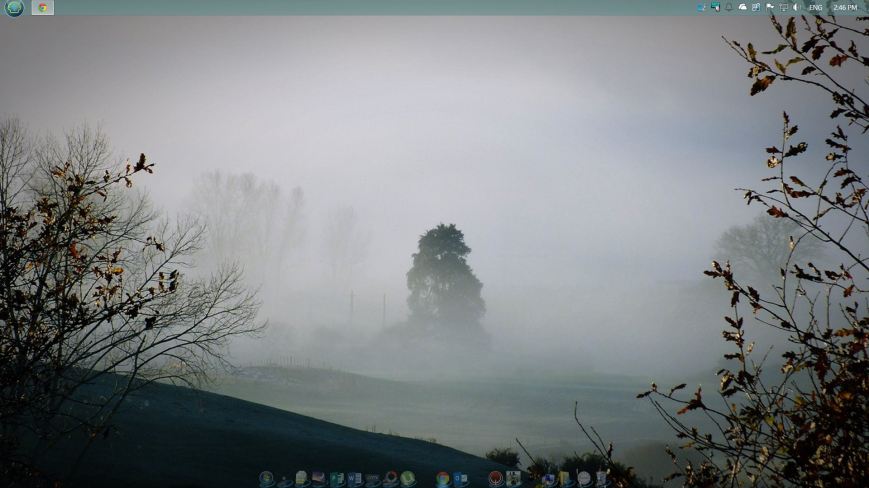 One thought on “Photoscape 3.7 .. using the Clone Stamp & Blur tools.”